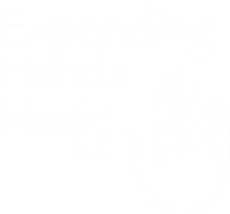 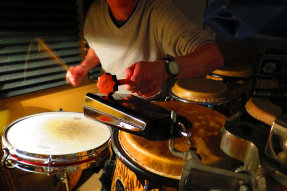 
EHM : 1) When you are learning a KC song from the 70s catalog
how do you initially decide the tonal way that you will approach the bass? (played with fingers, pick, Funk Fingers, etc)

TONY: Very good question. First I try to just learn the song, and some elements of the bass part goes with that. If its really tricky, generally Ill write it out. (And sometimes it may take me a long time to learn it.)
As with any piece, Ill often get a sense, internally (i.e. not think about it, just get a feel) of the way Id like to sound on the piece. Then Ill aim at the instrument or devices to get me that sound. So, thats part A somewhat learning it, and getting a feel of the sound Id like. Then, when we go into rehearsals, its part B I might start with the Stick, and Robert might say, Oh, thatd be great on bass or NS and then Im kind of go back to Go but its worth it, because there are times when a nudge in a different direction is a good thing for me, and when its coming from Robert, its alway in sync with his sense of the direction of the band, so Im happy to go there. Next comes, fortunately, a whole bunch of rehearsing the piece with the band, which includes of course 3 drummers doing a very different part than the original. So, whatever the start point was, I keep tweaking the sound, trying out effects (I must have 5 crunch options in the rig, and often theres only one that gets whats best for the piece.) Or it could lead to trying something completely new, like ppick or triple wrapped Funk Fingers. Its wonderful having the time and opportunity to try out those ideas much like the r&d department. And, the process doesnt really end when we start touring its a fact, for example, that Im still tweaking the sound for Red, though Ive been playing it since about 1982.

EHM: 2) Do you generally approach the 70s KC material with electric bass in mind or do you also consider playing those songs on Stick or Electric Upright when you begin learning them?

TONY: As discussed above, theres no rule involved just play it by ear, literally, i.e. try things and see how they sound with the band.

EHM: 3)Being that you are the only bass player, do you have complete freedom in playing the bass parts as you see fit or do other band members have input?

TONY: I do have a lot of freedom re the parts. Every band arrives at its own policy for suggesting part changes to other players. Ours is quite functional a lot of respect for the player, and maybe occasional suggestions but not so its all the time. And add in a healthy dose of; sometimes maybe we dont love what somebodys doing, but we tolerate it.


EHM: 4) Do you find that playing the 80s KC material more challenging with 8 players now or back in the day when the band was a quartet?

TONY: Equal those pieces still feel like works in progress to me, at least the bass part so one of these days Im going to find the right B section to Discipline, and boy will I be glad!

EHM: 5) Is a quick transition from a KC tour to a Stick Men tour when playing songs both bands cover such as Level 5, Larks 2, or Red, tricky because of the complexity of your role in the songs changing?

TONY: There are indeed differences. Mostly the transition is about remembering how I did it in Stick Men (in Crimson we rehearse a lot, in Stick Men hardly at all.) (And in the piece Breathless, the Stick Men version has one more beat!)

EHM: 6) Is there a new studio Stick Men album in the works or planned for the foreseeable future?

TONY: Nothing planned, but hopefully before too long. Ill begin writing some things when I have time off in May.

EHM: 7) Do the 3 drummers in KC ever try to change things as a joke just to try to screw you up?

TONY: No, but they do play very tricky parts sometimes, which DO screw me up, and they know it. (like snare backbeat 1 eighth note later than normal.)

EHM: 8) It has been a few years and I wonder if you are working on or planning a new solo album for some future release?

TONY: Id love to progress on it. Its been too long. But like everything it requires some time off from touring. Hopefully will make inroads this year.

TONY: Only other is The Pete Levin Band.

EHM: 10) I know that you are very busy and must always look forward at your current and future projects just to keep up. You are in a unique position in that you are in 2 iconic bands, King Crimson and The Peter Gabriel Band, both of which have been around for decades. Do you ever give that a quick thought? Most other musicians that play in major long term successful bands only play in one.

TONY: Well, Peter hasnt been too busy these last years. But Im lucky indeed to be in both bands. And, no, its not something I think about  usually pretty immersed in whatever music Im attempting to play. Occasionally a look to the future, but rarely a step back to see my career in perspective. Mostly only give it a thought when answering interview questions!

EHM: 11) Are there any aspects, gear wise, when playing live that are a lot easier for you now than say back in 1977 with the technological advancements that have occurred since then?

TONY: In ear monitoring is great, and I do wish wed had it back then might have saved some of my hearing! Also tuners are better. Amp modelling is nice, but not something I couldnt live without. Really, the advent of inear monitoring brought the stage levels way down, helping our ears and also making the job of the front of house engineer much easier, and the house sound better without all that leakage.
A Levin questions for Tony Levin
Basses, Chapman Stick, (King Crimson, Stick Men,Peter Gabriel, Paul Simon, Pink Floyd, AWBH, John Lennon, Bowie and many more